Teams of 2-6 students will design and build two robots to compete together, using Lego OR VEX IQ robot sets. Students will drive robots with remote controls and attempt to score points on the course. On the day of competition, they will face off against other teams in 2 on 2 matches to advance through a tournament bracket to the final match.

Prepare for and participate effectively in a range of conversations and collaborations with diverse partners, building on others’ ideas and expressing their own ideas clearly and persuasively. Creativity, Collaboration, Communication and Critical Thinking.

Designing and Programming your Robot:

Robots must be designed and built to collect balls from the course and place them in the goals. For this event, robots may be controlled with a remote-control program or phone app. Robots should be small enough to maneuver around the course and shorter than 7 ¾” to fit into the goal area.

The course will consist of a 10’x10’ field as shown below constructed with ½” PVP pipe. There will be three 3” colored balls for each team to push into their goal to score points.  The balls will be sitting on a medium size rough tread lego tire. Goals will be 24 ½” wide and will have 7 ¾” clearance underneath the crossbar with a 2” wide section around them for containing the balls.

Robots will be positioned at the start of the match in the spaces between the three colored balls of the opposing team.

Teams will face off in 3-minute matches. The first team to place ALL 3 BALLS in the scoring section of the goal wins the round. If time runs out, the team with the highest score wins. If time runs out, AND both teams have the same score, next to score wins. Balls must remain in a scoring position to be counted. If a ball is bumped out, it will be tossed back into the middle of the field.Teams may attempt to remove balls from their opponents’ goal but may not enter the goal area. If any wheel enters the goal area, the robot will be placed outside the course and must be driven back to their own goal. Then it may be placed back on the field next to their own goal. If a ball was bumped out while the robot was in the goal, it will be returned. 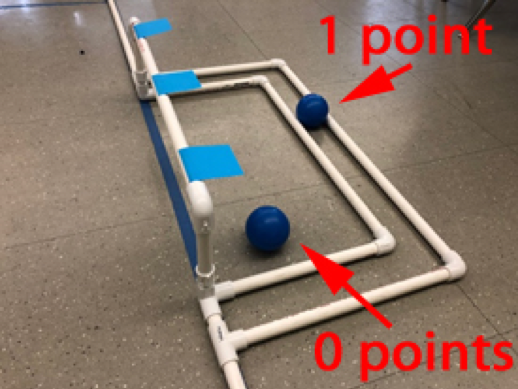 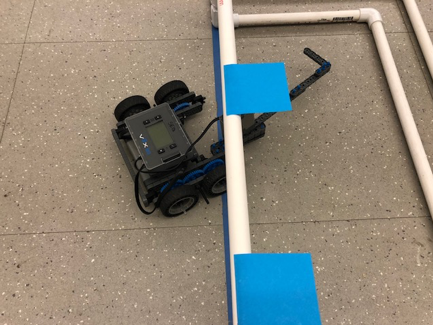 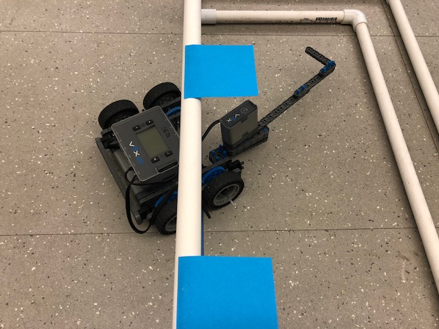 Teams will advance through the tournament bracket in an attempt to make it to the championship round and win the final match. 1st place will receive 70pts and each subsequent rank will receive 3 fewer points than the prior rank:
(2nd = 67pts, 3rd = 64pts, 4th = 61pts and so on).

Students will create a document outlining the process of designing and testing their robot. There will be four main sections: Research, Specifications, Programming and Testing. The document will be worth 30 points. Design Documents must be converted to a PDF file before uploading to the TOT App Submission Portal no later than 10:00 pm on March 6th, 2020.

In this section students will use the internet or other sources to search for facts and information about robotic space exploration. They should provide specific examples of robots in space and cite the sources they used for their research. Finally, they should describe how this research relates to their own project.

In this section students will list the dimensions of their robot (length, width, height). They will also include labeled pictures of their robot to showcase different components and design.

Students will explain how they controlled their robot to complete the task. They should include a diagram of their controller to show how they mapped their motors/ports as well as any other configuration settings.

In the final section, students will describe the testing of their robot and what modifications they made to improve its performance on the course. This should include physical changes to the robot such as changing the wheels, modifications to the arm/claw or even redesigning the robot. It could also include changes to the programming. Students should include a data table showing the results of different trials.

Visit the Soccer Bots Documents Page to see a sample Design Document and Event support files and our new YouTube Channel to view tutorials to help prepare and practice.


Teams will advance through the tournament bracket in an attempt to make it to the championship round and win the final match. 1st place will receive 70pts and each subsequent rank will receive 3 fewer points than the prior rank:
(2nd = 67pts, 3rd = 64pts, 4th = 61pts and so on).